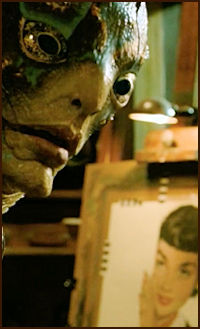 To a paranoid person self-interest, and preventing monstrous lesser beings from having things, is essential to self-preservation. But strangely, self-centered, paranoid people can clot together on a grand-scale (another paradoxical situation), drawn to each other through mutual recognition of their shared unshakable certainty that “every man for himself” is the only sensible way to engage the world.

On the other hand, for people capable of empathy it is extremely challenging, almost unnatural, to rally behind any single idea or cause since their primary commonality is diversity…in thought, size, color, etc. And their enthusiastic expression of the merits of diversity makes paranoid people bat-shit, murderously crazy. Del Toro would have us understand that when such crazies have the upper hand, empathy is dangerous and heroic.

I think “The Shape of Water” is a beautiful distillation and illumination of all the cranky ideas I’ve strung together above and lots more. If you haven’t seen it I hope you will check it out.

PS: For a sweet, low-budget, small-town version of essentially the same story check out the movie Rufus, which includes a wonderfully natural and impressive performance by David James Elliot who played Harmon Rabb for 11 years on the television series “JAG.”

[This post was strenuously rewritten on 12/21/19. Apologies to any who may have struggled through the original version.]