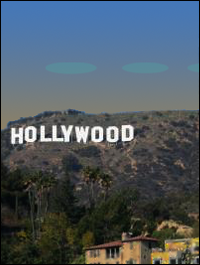 Several years later my wife and I were having dinner with Pam and Don, a couple we did not know well but liked. Our apartment was on the fourth floor of a building on Harvard Street between Hollywood and Sunset Boulevards. We were dining beside a set of French windows that opened out onto a glorious fiery sunset beyond rows of palm trees. I was sitting across from Pam telling about the experience I had while smoking a pipe by the sea. I got to the part where the horizon split and the strangest thing happened. I could see the double horizon across Pam’s face. The sky above her eyes and the sea below them. I felt again that wonderful sensation of meeting with some exquisite person and I heard myself say, “Then someone came to me.”

I was again in that in between place. Flying blissfully over the sea and under the sky. But I was also at the dinner table, aware that I was motionless and quiet, staring at a women I hardly knew, who gazed back with a gentle smile.

“He’s in a trance,” Pam explained.

“But what if he doesn’t come back?”

Pam’s smile broadened a little, “He will.” And indeed I was once again simply sitting at the table with my wife and our guests.

It turned out that Pam was a hypnotherapist. She had the gift, and lots of curiosity about the places where those she hypnotized found themselves. She and my wife became close pals and collaborated on past life regressions. Pam would place her hand gently on my wife’s forehead and say, “Sleep”, then ask, “Who are you?”

After you’ve lived with someone for a bunch of years, whether you’ve consciously thought about it or not, you come to think you know them. So you can imagine my amazement to see and hear a stranger communicating through my wife’s body. Her name was Lisa Cunningham, a young English woman who sailed for New England in the 17th Century with her coreligionists seeking refuge from persecution. She had a distinctive, soft voice and quiet humor, and most memorable was a gesture she made with her hands when she was excited. Her fingers moved quickly and precisely along the edges of an invisible rectangular collar.

I happened to be present during the session in which Lisa described her own death. She had waited as long as she could for her husband to return, but there was nothing for it but to see if she could make it to the home of their nearest neighbor. She fell asleep in the snow.

Pam had a tremendous curiosity about the space between lives, and she asked my wife to describe that place. Only silence. Pam persisted. More silence. Finally, when it was clear the interrogation would not be suspended, a deep, imperious masculine voice I had never heard before nor since issued from my wife’s gentle lips. “You cannot know that.”

For an account of strange doings on the fringe in Renaissance Rome check out Cellini Courts Demons in the Coliseum.