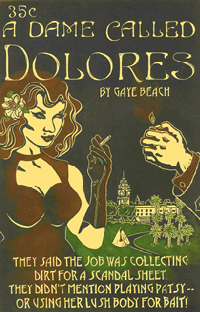 I tried to imagine how she could get Photoshop or CorelDraw or whatever to blend colors into each other so smoothly and still have so much variation of tone within just a few square inches. I found her typefaces mysterious. They seemed perfectly suited to the overall composition (always an accomplishment in itself) and uniform in the way one would expect a typeface to be uniform, but at the same time up close it was clear that each character had extraordinary individuality. I speculated that she somehow found convincingly retro typefaces, keyed in the text, then converted the characters to images so she could subtly rough up an edge or two here and there.

And then there was the overall visual warm of each image, which was often in emotional contrast to the surface message the composition seemed to convey. I found this dissonance especially exciting, and it always made me smile. The warmth seemed to push against the ideas, like doors flinging themselves open, revealing a riotous menagerie of macabre and tantalizing associations. And when I looked away I always found myself feeling like some sort of privileged insider. As if I had been initiated…but into the rites of what?

Before I suggest some possible answers I should mention that I happened to wander into a show at the City Arts Gallery on Valencia in San Francisco and found the largest collection of Katie’s pulps I had ever seen in one place. I went from print to print, looking close and smiling, and eventually struck up a conversation with someone standing nearby who turned out to be Katie Gilmartin herself. She graciously answered all my questions. Consequently I am able to report that the pulps do not emerge from a computer. Rather each is a three color print transmitted to paper from a linoleum slab into which the image elements have been carved in reverse. Katie prints all three colors at once having carefully applied by hand inks of three different viscosities, which causes the colors to stay where she puts them and intermingle just a little with their neighbor colors to infinitely varied degrees along the borders of features. I’ve attended a demonstration of this process, but it has not diminished my amazement.

I mentioned earlier that for me the experience of contemplating one of the pulps feels like an initiation. And this feeling has only been intensified by knowing more about how the various images came to be transmitted. Imagine Katie in her shop apron, the tools of her craft in hand, like an alchemist toiling long and hard at complicated and precise manual tasks. And from the concentration of will, imagination, art and technical expertise, something living emerges from matter.

So who is this dame called Dolores? Several personifications at once, I think. On the one hand she very wittily resembles a 1950s popular fiction collision of harsh realism and perverse unconscious material, bound for a wickedly entertaining doom of the sort required by a civilization that desires what it fears. Yet at the same time she looks so strong. Her eyes mystifying. Is it possible she actually has the upper hand? Perhaps the man holding the lighter was not really prepared for what the flame has revealed. Perhaps he is taken aback. Perhaps so much so that he has fallen almost entirely out of the frame.

Most of all I think she is a genius loci – the spirit of a place. In San Francisco, there is a park called Dolores. If you stand at the corner of 20th and Church Streets and look north across the park you see the vista pictured in the background of the pulp image. A verdant expanse sprawled over two square blocks of lightly rolling hills. Neighborhood gentrification has toned the park down considerably, but in the day it was where gangs openly peddle drugs and occasionally exchanged gunfire. Today it remains one of the most comfortable places in the city to lie on a blanket, smoke weed and drink beer. And it is the kickoff point for all manner of colorful events. The annual Dyke March starts there – a spectacle not to be believed or missed.

The park also lies on the boundary between the Castro and Mission Districts. “The Castro” to the west is “where all the gays live”, which is not entirely, literally true, but true enough. And “The Mission” to the east has for generations been the center of San Francisco’s Latino Community. In Spanish, Dolores means “sorrows.”

I wonder what she is doing out so late. And dressed up like that. Or is she always there, standing in the dark near the corner of 20th and Church waiting for a light?

1 thought on “The “Pulp Art” of Katie Gilmartin”