One of the things I discovered when I pulled together my thoughts regarding the image at right is that it is the most recent in a related series. Predating the black-and-white digital composition is an unfinished oil painting. And long before both there was the ornately carved exterior of a large trunk my grandmother brought back from “the Orient” in the 1920s. (Actually, my grandmother did not visit the orient and return with the chest.  Please see the correction at the bottom of this post.)

I recall gazing blurry-eyed into the computer screen, chiding myself for putting so much detail into the feathery mane that extends down the creature’s back. By the time I had applied an inch or so of overlapping half moons I was utterly bored with the process. I considered deleting the mane “layer” and starting over, employing some other, simpler graphic element. But I found I could not let go of what I had already done. And there was nothing for it but to grit my teeth and apply more, ever-smaller flourishes down the creature’s spine.

When I finally reached the rump, and the mane was done, the emotion was like hearing the whistle blow at 5 pm on a Friday. A rush of delight that the time of servitude had ended and I could now put my feet up on the desk and whistle. Or smoke a cigar. Or do any other simple, pleasurable thing I felt like doing. 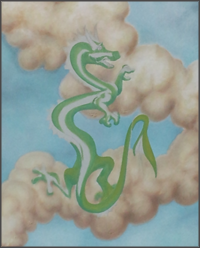 On the other hand, my feelings concerning the unfinished painting at left include no small amount of disappointment with myself. That canvas has hung on my bedroom wall for nearly 30 years. In other words, it has literally hung over me while I slept for almost three decades.

I’m sure I copied the basic image from the unfinished painting to my computer screen, but most of the details of the transfer have entirely escaped me. Except as noted above, when some requirement of the execution became annoyingly tedious, the hired hand in me just followed instructions while my thoughts busied themselves with nothing in particular.

On the other hand, I remember many things that were on my mind at the time that I stopped working on the oil painting. I was very pleased with the general direction in which the painting was going, but also disheartened by the realization that I did not possess the technical skills necessary to do what I was pretty sure needed to happen next. I felt strongly that I had to finish the clouds and sky – the background – before working further on the “dragon.” (At that time I thought of the creature forming on the canvas as a dragon, rather than a lizard.)

And I was certain that the clouds and sky needed to be almost completely concealed in mist. I imagined applying layer upon layer of light gray-white dustings, but I knew my hands were not ready to perform such delicate work. I knew the dragon would need to have a highly detailed scaly skin, and lots of wispy, swirling, long black hair that extended down along its back. Again, I had a strong sense of what I needed to do, but I also knew I was not ready to do it. I comforted myself at the time with the idea that if I worked on lots of other paintings and tried all sorts of complex and delicate things, I’d eventually be ready to finish the dragon, but that never happened and the canvas has remained as you see for many years. 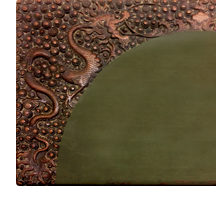 One night while lying in the dark thinking about composing this blog, with the painting hanging nearby, I remembered “the Chinese chest” – the marvelous old trunk that’s been in storage since my mother’s death. A portion of the trunk’s carved exterior is pictured at right – a dragon rampant, flames erupting from its mouth, surrounded by billowing smoke. That image was suddenly vivid in my thoughts, and I remembered how it had served as a doorway to worlds beyond the physical boundaries of my childhood.

The small house in which I grew up was one of about a hundred tract homes clustered close together on small lots separated by low chain link faces. To the west was a huge oil field that extended further than the eye could see. The sun would set through a red and purple haze beyond a forest of wooden derricks. All night, orange gas jets wriggled from the mouths of narrow pipes standing upright a hundred feet in the air.

Just beyond the back fences of the homes on the northern edge of the housing tract, a muddy creek ran along the bottom of a narrow gully, overgrown with scruffy trees, and full of crawdads, toads and swarming mosquitoes. To the east lay a somewhat older, grander and unwelcoming cluster or tract homes…no crabgrass, but lots of dichondra and ivy. To the south, orange groves stretched away in impossibly straight rows that all seemed to converge into the same small point on the horizon. Here and there a farmhouse, alone and melancholy. Some long abandoned.

Environments that provided abundant opportunities for adventure and childish misbehavior were just a short bicycle ride from my home in all directions. But the doorway through the dragon was near at hand, in the living room of our house. Rain or shine, high noon or late at night, indistinct in the pale yellow glow from the porch light outside.

The ritual was simple. A fixed, unhurried gaze upon the carved features, a forgetting of oneself… Then being elsewhere. Like the dragon pictured on the box, floating, untethered, entirely at liberty to appear and vanish in swirling smoke.

I have to ask myself, “Where’s the fire?” It appears I left it on the trunk, since there’s no sign of it on the canvas or in the black-and-white digital composition. And what does that mean? Apparently something significant since I know what I have drawn is a lizard, not a dragon. Perhaps you have some ideas.

CORRECTION, November 2022:  My sisters have reminded me of how the “Chinese chest” actually came into our household.  My mom, Helen, was a rare beauty.  In her teens she was much admired by a merchant seaman that lived next door to the home of my mom’s aunt Mary who had taken my mom in after my maternal grandmother took her own life.  My teenage mom was also quite taken with the sailor, whose name was Jimmy. So much so that she spoke constantly about him. “Jimmy this.”  “Jimmy that.” The adoration was so unrelenting that my great aunt (my mom’s aunt who was raising my mom) began calling my mom Jimmy. So years later when I was a child and my then quite aged great aunt was living with us, she was still calling my mom Jimmy.

Now I think I can safely say that Jimmy was absolutely smitten with my teenage mom. It was he who traveled to the orient, secured the “Chinese Chest” and gave it to my mom as a gift when he returned. To give you a sense of how smitten Jimmy was, he had no room for the trunk in his bunk area on the freighter that brought him back to the states. So he selected a bottom bunk, and tipped it up on its hinges so the bunk was flat against the wall. Then he put the trunk in the area where his bunk would ordinarily tip down into and slept on top of the trunk. It’s a pretty big trunk, but not so big as to provide an adequate sleeping surface for a hearty sailor.  The crossing likely took about three weeks.  Ah, the power of love.