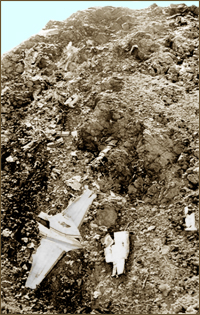 My next recollection of Rick is many months later. The theater company where he and I had met was run by a complicated man in his forties named Ron whose creative work was wonderfully subtle – in marked contrast to the coarse impact he sometimes had upon the young actors whose lives he touched. One night early in our association Ron and I had meditated together, sitting on the floor in the dark with a candle flickering between us. After gazing at the flame for some time, my eyes moved up to Ron’s face. The flame seemed to rise as well until it came to rest in the center of his forehead. It was an impressive image, but it also reminded me of a photo I had recently come across in a biography of Aleister Crowley, an English occultist who liked to think of himself as The Great Beast. In the photo Crowley wore a hat that positioned a luminous eye at the center of his forehead. I found the association sobering and from then on could not think of Ron without recalling Crowley’s tendency to chew up and spit out the unwary.

So I was surprised to bump into a much-toned-down Ron on the street near his theatre one evening. He was uncertain. Something I had never seen before. And there was a reddish starburst scar on his forehead over his left eye. He explained that he had been in a wreck late one night on Sunset Boulevard. His beloved “two-seater” Morgan sports car had been totaled. It was not the sort of thing that happened to him and he wanted to talk about it.

We went to his apartment for a drink and he described at length the strange course his life had taken since the “incident,” which included his coming under the influence of Scientology. “They’re helping me understand why I crashed my car,” he explained. I could not have been more surprised. Ron was the last person in the world I would have imagined ever allowing anyone else in the driver’s seat. He may have seen the alarm in my eyes since he suddenly steered the conversation to how things could be worse. “Take poor Rick Ackerman, for example.” I had no idea what he was referring to. “How could you not have heard? It’s all anybody talked about for weeks!”

Ron opened a trunk and rummaged through back issues of “Variety” until he found the headline he was looking for: “31 From Wolper TV Crew Dead in Hollywood’s Worst Air Crash.”

It was a horrible mess and made no sense. The pilot had flown in and out of Bishop at night many times. As far as the National Transportation Safety Board was able to determine there was nothing wrong with the plane. And nothing the tower heard on the radio suggested anything had been amiss on board. Nonetheless, the twin engine Convair 440 hit a rocky ridge 180 feet below the crest and exploded, throwing flaming debris over the top and down the other side.

Rick had been cast to play a Neanderthal man. The production company had spent the day simulating a Siberian tiger hunt in the snow near the Mammoth Ski Resort north of Bishop, then, with night closing fast, most of the cast and crew hurried to the Bishop airport to catch the charter flight back to LA. It is easy to visualize the plane flying just a little higher, or just a little further to the west. No one on board even aware how close they had come to the harsh terrain that raced past in the dark. Every one of them getting home before midnight. Sleeping sound and snug in their own beds.

In my imagination an image of the crash site began to form. Cold, desolate and lonely like a twilight call so far away that the heart despairs. It occurred to me I knew things that felt significant. I knew Rick’s face. His voice. I knew the date and time of his death. And I knew a scent he liked very much. It crossed by mind that with a little effort I could probably find the actual place where the plane struck the mountain. The first anniversary of the crash was five months away. There was plenty of time to prepare.

One of the many delights of Hollywood in the 1970s was its abundance of antiquarian booksellers within walking distance of each other. In a community that small, if you were looking for something word got around fast. This was before investors had bought up everything and driven prices to impossible heights. Desirable items could still be found at figures that seem unimaginable today. For example, a first English edition of Lenormant’s 1877 Chaldean Magic, a marvelous collection of provocative and very old incantations, could be had for a meager $25.

One particularly memorable verse from the book runs:

I knew a truly adventurous man. He had studied bull fighting in Mexico, been a bush pilot in the Australian Outback, was a scuba diver and an experienced rock climber. He offered the very sensible advice that I not go climbing in the White Mountains alone. When I declined his gift of good sense, he graciously loaned me some equipment he thought I would find useful should the place I was going turn out to be covered with snow. The provisions included yellow tinted goggles, an ice axe, and sets of sharp aluminum cleats he called clamp-ons that I could attach to the bottoms of my shoes if I needed to cross an ice field.

The ice axe was an especially welcome item. It was long enough to serve as a walking stick, and had a leather strap near the top of its staff that I could loop around my wrist so it would not go tumbling away if it slipped from my grasp. Also, I thought it just plain looked cool. The sort of functional and handsome thing one would want to have with them on an adventure.

Almost all I thought I knew about anything connected with the out of doors had come to me while munching popcorn in a darkened movie theater. A colorful mental catalog of vicarious experiences neatly organized along plot lines. People were cold or tired because that was what was needed at that moment to advance the story. Not because they were actually cold or tired. Clothes were costumes. Atmospheric conditions were always of very limited scope, seldom lasting more than 120 minutes when the music faded and the lights came up.

Fortunately, my wife had been a girl scout, so my kit contained things to keep me warm and things to shield me from the sun, things to eat, and things to apply should I injure myself, along with a jar of Oil of the Tortoise that Rick had given her. Early on the morning of March 13, 1975, she kissed me goodbye.

6 thoughts on “The White Mountain Crash”