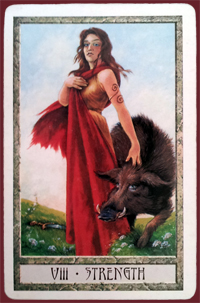 T:  Do you see anything particularly exciting or challenging about telling a story from the point of view of a young girl?

N:  Well, it isn’t done very often. Or hasn’t been done very often. We’ve had centuries of “the story” being about the male coming into his self. It’s only recently that we’re seeing stories that are equally compelling being told from the feminine point of view. Stories like “Brave” and “Spirited Away” a couple of years ago. Telling a “young girl” story is in itself is a leap of faith because you have to trust that you’re going to find an audience for it. I think that the “young girl” story is different from the “young boy” story. And I think it’s very exciting to see.

T:  In “The Beasts” the young girl heroine is named Hushpuppy. And there are some giant, fiercely-tusked wild boars that figure prominently in the story. They are portrayed as travelling an impossibly long way. And it appears they travel with purpose – to menace Hushpuppy and her community. Is that the way you saw it?

N:  Oh no, no, no. They are creatures from beyond the time of time. Solely from the age of heroes – the age of all things archetypal – who walk the earth without reference to any particular person. And definitely not just to menace a girl or her community. It seemed to me that the story is about a devastating time of great trial. These great beasts are there, I thought, because Hushpuppy was facing her final test. Her need for the final test summoned them up. I think they were something that her psyche needed to contend with, and that’s why they were there.

T:  What do you make of the imagery of the boars in the movie?

N:  Most of the time when people say the word “boar” they put the word “wild” in front of it. Boars are, I think, by definition wild. They are untamed. They’re not pigs. They’re boars! They’re totally undomesticated. They are truly wild. And that’s the place boars have in this story – in the same way that weather is untamable in this story. The weather is wild, nature is wild. It’s big. It’s the area of the un-rational. It’s entirely the animal. The instinctive. The untamed. And we’re presented with a little girl who is on the brink of being civilized, but her little life is still wild and untamed too. We see her on the brink of entering into a more rational, communal, social world. We get to be with her during the major, final conflict between the wild, the instinctual, the untamed and something new that she is becoming.

T:  When I asked you if you had seen the movie you described a particular tarot card (pictured above).

N:  In tarot what the cards of the major arcane show – what they do – is follow a life cycle. From a personal point of view it takes you through the time when you are developing your own personality. And then you move through a time of interaction with others in the social, civilized realm. And finally it’s you going through the process of spiritual development, and finally enlightenment and completion. “Strength” is the first card of the second series of cards that deal with how the individual and its soul, its psyche, is at play with society. The card itself is about how one develops strength. It’s the classic confrontation with “the other.” The other that is scary. The other that is big and frightening and overwhelming. The thing which you cannot control. And most importantly, it’s about how you contend with that. The lesson of the card is that you don’t try to beat it down by being stronger than the other, or wilier than the other. The key to strength is to have the courage to confront your fears. To confront your fears in a way that is centered, with a sense of self-assurance. To look that which you are confronting in the eye, and be able to look at it with compassion and courage. To say “I accept you for what you are.” In that way you are able to take on the medicine that is offered by this archetypal foe. Through your courage and compassion to simply accept, remarkable passion and intuitive strength is available to you.

2 thoughts on “Tarot & “Beasts of the Southern Wild””