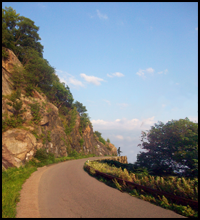 Also, there was a rock ledge near where we parked that offered a spectacular view to the west. We sat side by side on a huge flat bolder — Danny, Crystal, Terry and me. We had decided upon a menu for dinner and were considering the details of the ritual we would perform at sunset when Crystal made an exciting discovery.

Sliding the heel of her shoe along the surface of the rock on which we sat she dislodged a shallow disk of dried mud that revealed a bowl about eight inches in diameter and half an inch deep that had been carved into the rock. We soon found four more.

We were sitting where Native Americans had sat, perhaps for hundreds of years, grinding meal from acorns, and looking out over a marvelous vista. The idea filled us with excitement and seemed such wonderful good fortune that we all became a little giddy. Danny and Crystal had dinner duty, so Terry and I decided to stroll along the rock ledge to see if we could find any other signs of ancient peoples. Perhaps an arrowhead or some other artifact.

Laughing and talking, we strolled along the ledge which wound around the mountain to the south, with a steep drop on our right and a rock wall on our left. Suddenly there was a sound like someone running. We looked up just as a husky man in his late twenties appeared on top of another rock ledge about eight feet directly above us. He wore khaki pants and a white t-shirt. His left hand appeared to be broken. It was bent as if the bones between his wrist and his knuckles had been snapped. There were two raw gashes on his face. One in his left cheek, the other above his left eye, as if someone had jabbed at him with a half inch pipe, but there was no blood. Just the skin pealed back.

He looked angrily to the right and left then realized we were right below him. When he saw us he stopped moving and stared down at us scowling. It occurred to me that in addition to being very angry he was in shock.

“Hello”, Terry said. The man just stood there. The rise and fall of his chest became more pronounced as he took deeper and deeper breaths.

“He’s fine” a voice answered, and then a second man appeared on the rock above us. Late twenties, blue jeans, long sleeved checked shirt, no injuries, calm, smiling. He crouched down and asked, “What are you doing here?”

His eyes were of a sort I’ve only seen a couple of times before or since. Eyes without feeling that express nothing except a lack of regard for what they behold.

“A bunch of us are camped over there,” Terry replied.

“How many of you are there?” the calm man asked.

“Seven,” I said, and then to Terry I suggested, “Shall we get some dinner?”

“Right,” Terry said. He and I both made little wave goodbye gestures to the men above us and hurried back along the rock ledge. Soon we were running, and by the time we got back to our companions we were of one mind. “We have to go right now,” we said and began throwing stuff into the van.

Danny and Crystal caught our fright and in an instant we were entirely packed up. We had the presence of mind to dowse the campfire with water, but then we had none left to pour on the hot frying pan. It ended up on the floor of the van where it melted down into the rubber struts that ribbed the metal flooring and filled the vehicle with acrid smoke.

In spite of our panic, Danny drove with care through the trees. If this had been a horror movie this is the part where the van skids into a ravine or breaks an axel on an unseen gully. But in minutes we were out of the trees and Danny slowed as we came to the highway. We were going to go north, to the left, in the opposite direction from which Terry and I had returned. But we wanted to know if anyone was approaching from the south. So we all stared out the windows on the right side of the van, and at first saw nothing except the ribbon of asphalt winding out of sight around a curve about a hundred yards from where we were stopped.

Suddenly a white VW Bug appeared from behind the slope of the mountain, but it was not traveling toward us. Rather, we were seeing it from the side and watched as it crossed the highway, went over the edge and tumbled into the valley below. We sat there slack jawed. “Did you see that?” someone asked. Then something else appeared at the curve in the highway. It was a man carrying an assault rifle, running toward us.

Need I say, we were off in a swirl of dust in the opposite direction. It was a long time before we could find a pay phone. Danny told the Highway Patrol what we had seen, and then we drove non-stop and wide eyed back to Hollywood.

3 thoughts on “Tempest in the Wild”