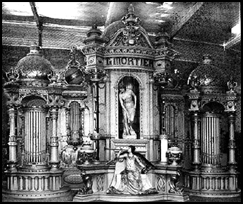 Until 1919 Santa Fe Springs, California, was all farm crops and orchards. But then oil was discovered and within ten years the formerly tranquil agrarian community was producing more petroleum than any other town in the state. A forest of oil derricks sprang up, many on the sprawling Hathaway Ranch, and members of the Hathaway family formed the Hathaway Oil Company.

The family’s cluster of ranch houses on sites across the street from each other on Florence Avenue morphed into Mediterranean style villas. By 1968 when I began working nearby, those stately, high walled and tree shrouded residences were a little puzzling to look upon, surrounded as they were by dreary oil field desolation.

One of the children of the Hathaway oil barons, Julian Terrell, or Terry as he preferred to be called, was my boss. To the best of my knowledge, Terry had little or no interest in the oil business. Though I worked closely with him for almost two years I cannot recall him ever mentioning his family, or that they owned the oil derricks that dominated the view out the back door of the warehouse where Terry was the proprietor of a somewhat unusual business enterprise.

The warehouse included a huge workshop where my colorful mates and I punched our timecards each morning then set about repairing and restoring mechanical musical instruments. This arcane field was Terry’s area of expertise. The machines he had restored himself were magnificent. His understanding of all the arcane aspects of the field was encyclopedic.

It was great fun to watch Terry noodle over a restoration challenge. His eyes would narrow, and after a moment or two of consideration, he would explain the whole thing and give me direction. Every day was a tremendous learning experience. And it was also a marvelous opportunity to work with unusual materials. Fine woods. Exotic leathers. Kangaroo leather was my personal favorite. Shiny black on one side, soft greenish yellow on the other, and extraordinarily pliable. Great for gussets in the bellows of the pumps that pushed air through the tubing that animated the lovely old mechanisms.

The machines themselves were usually very big and very heavy. Most were constructed in Germany or Belgium between 1880 and 1920. Some were band organs, intended to produce raucous music loud enough to be heard over the din of crowds and machinery at amusement parks. Others were orchestrions intended for use in dance halls and salons, subtlety engineered to simulate an orchestra. Occasionally a simple player piano would find its way into the shop, but they were of little interest to Terry. For him if there was not at least a little mystery, or some sort of puzzle to solve, it just wasn’t fun.

Most of the time he exercised his wits figuring out how some strange mechanism was supposed to work, but on one memorable occasion the challenge was to figure out how to get an especially big machine that had been delivered in pieces put back together again within the limited vertical space available.

I should explain that most mechanical musical instruments are composed of two dissimilar gross components – the mechanism that plays the music, and the cabinet or façade within which the music-making system is housed. Often the façade is extravagantly larger than the music-making system. And such was the case with the Mortier “Taj Mahal” pictured above. To give you a sense of the scale, the scantily clad figure on display in the center of the façade is a little larger than life-sized, while the mechanism that produces the music is concealed behind the façade in an area that is, as I recall, only about 8 feet high, 10 feet wide and 3 feet deep.

You will note that about the only resemblance this outlandish band organ bears to the actual Taj Mahal of India is that it has three domes. And the band organ’s central dome was a half sphere built to last of thick wooden beams. For reasons I will explain later, I’m guessing it weighed somewhere in the area of 650 pounds. Terry had calculated that when the entire façade was assembled there would be only about a foot of clearance between the top of the central dome and the ceiling. Also, when assembly was complete, he wanted the machine positioned with its back close against a wall.

Here was the sort of puzzle Terry could get his teeth into. Looking ahead, he realized that if we put the machine together in its final resting place along a wall we would have to somehow elevate the huge dome to a height of approximately 18 feet above the shop floor and move it laterally into place. A hazardous enterprise. And if the dome took a tumble, even if no one was injured, there would likely be significant damage to the elaborate façade, or the complex and fragile music-generating mechanism behind it, or both.

Terry devised a bold solution. The floor of the warehouse was flat smooth concrete, so he had us assemble a platform constructed of plywood and 4x4s on heavy metal casters large enough to serve as a movable base upon which the entire band organ could be assembled. With the platform positioned in the center of the workshop we would put the machine together until only the central dome was left to be set in place. Then we would use a block and tackle (two pulleys threaded with rope) attached to the ceiling to hoist the central dome up as high as it would go above the floor behind the machine. Then a band of hearty lads would push the platform and machine back until it was under the dome, which would be lowered into place. The block and tackle would be removed, and the completely assembled machine would be pushed back further until it was positioned close against a wall. We all embraced the audacious plan, and threw ourselves into its execution with vigor.

As it happened one of my coworkers at the shop was named Jerry, but I will call my him Crossbow. For reasons he did not share with me, Crossbow had taken it into his head to construct an armor-piercing crossbow made from an automobile suspension leaf spring. Since we had wood- and metal-working equipment at the shop he spent a couple of weeks of his lunch breaks constructing a rifle-like stock of hardwood, and ground the iron leaf spring into the shape of a bow. The finished weapon was very handsome and required a car jack to draw the wire “bow string” back to the trigger catch…or so I heard. I never actually saw the amazing contraption in use. But to return to the Taj Mahal, Crossbow and I were assigned the task of hoisting the central dome up to the ceiling and maintaining it aloft while everyone else pushed the rest of the machine underneath it.

I suppose if you work long enough at any enterprise you become familiar with particular sounds and come to associate them with particular circumstances. For example, I imagine that if someone does a lot of cooking they eventually come to recognize a certain sort of hiss and rattle as indicating that something is boiling over. Well, after working for a while in this particular shop we all recognized a singular sort of scraping sound as indication that a screw lying on the concrete floor had become lodged under a metal caster wheel preventing it from rolling further. That was the sound we heard almost immediately after the hearty lads began pushing the huge machine…which came to a sudden stop.

Now I was thinking, “Hmmm. We might as well lower this thingy back down until we can figure out which of the 24 wheels has a screw jammed under it.” But before I could offer my suggestion Crossbow shouted, “I got it”, and he let go of the rope.

As soon as he let go of the rope, Crossbow realized something was amiss, and it was touching to see his look of stunned regret growing smaller as I moved away from him toward the ceiling. Then there was the whoosh of the dome descending very nearby and its sonorous thud as it struck the concrete floor below. There was shouting I’m sure, but I do not recall what was said. The few moments I spent swooping around just below the ceiling, however, was quite memorable. Seeing Crossbow running below me, leaping for the end of the rope that trailed behind me like a tail. Terry and others dashing around from the front of the machine, at first pointing and gawking, then laughing and eventually helping Crossbow lower me to safety.

5 thoughts on “Behind the Taj Mahal”