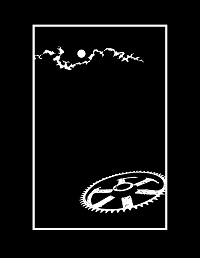 My freshman year in high school I attended a trade institute that offered mechanical technology courses including industrial drafting. One of the most challenging assignments was to draw the teeth of a gear of particular dimensions that needed to mesh with the teeth of another gear of particular dimensions. The point of the exercise was to help us understand the precision with which the curve of each individual gear’s meshing edge had to be ground for the two gears to rub against each other with minimal surface resistance. Ideally, the curves of the meshing surfaces of the teeth of both gears would be so precisely engineered and crafted that their points of contact as they rode against each other were literally a single point.

It took some doing to get my wits around the whole meshing thing so I could draw the gears, and I marveled that anyone could actually build gears that could mesh with precision. But it certainly can be done. I wear a watch that probably has half a dozen meshing gears inside that have been treating each other kindly for nearly three decades.

In the 1st Century of the “Christian Era” the Roman army employed a high tech siege weapon called a ballista. It was like a giant crossbow. To cock the weapon long poles were used to turn a drum that had a gear attached at one end. As the drum turned there was a clicking sound, like someone winding up an old clock. That sound was caused by a locking pin called a pawl climbing up one side of a tooth on the turning gear then falling down the other side into the space between the teeth. The pawl between the teeth was a brake that kept the drum from unwinding. To fire the weapon the pawl was disengaged from the teeth in the gear, the drum spun freely, and the giant crossbow pitched its missile. The gear and its teeth needed to be sturdy but precision engineering was not required.

So now at last I come to the Antikythera mechanism. It was discovered at the bottom of the Mediterranean Sea near the island of Antikythera in 1901. Carbon dating and a comparison of various inscriptions on the mechanism with Greek dialects spoken in that region indicate that this strange device was constructed at about the time the Roman’s were tormenting their enemies with the gear-enabled crossbow-like ballistas described above. But the Antikythera mechanism has 37 gears, allowing it to predict, among numerous other arcane things, lunar eclipses and the positions of planets in the heavens. Its largest gear is about 5.5 inches in diameter and has 223 teeth. An odd number! But 223 it had to be since that is the number of months in the lunar eclipse cycle.

The mechanism’s 5.5 inch gear diameter is 1.5 inches smaller than my Janus coin illustration’s diameter. And the mechanism’s gear has nearly twice as many actual teeth around its circumference as my coin illustration’s 128 circles in a string. In other words, over two thousand years ago someone or some team did something in bronze that was phenomenally more complex than I was able to do just 24 years ago in two dimensions on a computer screen. And that 5.5 inch gear is only one component of a mechanism that includes 36 smaller meshing gears, constructed with precision that was not seen again until simple timepieces began appearing in Europe 13 centuries later.

I find the implications of the Antikythera mechanism staggering. That measuring and shaping tools were available or were crafted that could turn out such precise components. That the knowledge, talent, patience, will and time could be rallied and sustained to bring such an audacious project to conclusion. That functional integration of so many disciplines – astronomy, mechanical design, metallurgy – was possible so long ago, at a time when the population of the entire planet was only 4% of what it is today.

I wonder what artifacts of our endeavors, if any, will remain two thousand years from now? Especially as we seem to grow more virtual and cloud memoried with every passing day. And if not remembered for amazing physical things, perhaps there will be some recollection of the choices we made. The things we might have done but did not do.

Perhaps something like, “They were so clever and so cruel. They had the means to feed and clothe and house and provide medical care to everyone on the planet, but they chose not to. They formulated concepts like kindness, compassion and justice and ignored them. Each lived as if they were disengaged from the rest and it destroyed them all.”

For more on the Antikythera mechanism check out what Wikipedia has to say. Scientific American offers An Ancient Greek Astronomical Calculation Machine Reveals New Secrets. And here’s a lovely and enthusiastic video courtesy of the BBC called Unlocking the secrets of the world’s oldest computer that you may enjoy.