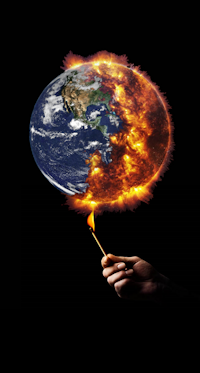 In the last chapter of his marvelous and frightening book “Our Own Worst Enemy: The Assault from within on Modern Democracy”, Tom Nichols observes:

But if we have learned anything in the opening decades of the twenty-first century, it is that people will think hard – or they will convince themselves that they have tried to do so – and still come up with incomprehensible and reckless anti-democratic conclusions … if the citizens of modern democracies were the kind of people willing to engage in the kind of honest reflection that leads to a commitment to political maturity, we wouldn’t be in the mess we’re in now.

My reading of Professor Nichols’s book suggests to me that he holds out hope that Americans and citizens in other democracies can still decide not to destroy themselves…that we can think their way off the road to ruin.  I’m less optimistic.

The primary reason for my pessimism is that I think human consciousness, like the biological machine that carries it, continues to evolve.  And that an ever-increasing number of human beings are now possessed of a form of consciousness that manifests itself in selfish and fundamentally sadistic behavior.  In what follows I’ll refer to such folks as “always frustrated people” (AFPs for short).

I hypothesize that way back in time the fundamental human experience of itself was as a group, but since long before recorded history the trend in the evolution of human consciousness has been toward increased self-awareness, with the result that now LOTS of human beings experience themselves as entirely individual.  These are the folks I think of as AFPs because it is inevitable that someone who experiences everything only through the lens of their own feelings and ideas must live in a state of constant frustration.  They can’t have everything they want.  They are constantly confronted with ideas they don’t agree with.  And I’m guessing a great many of their own ideas form around the day in, day out frustration of their desires.

People who are constantly frustrated, and AFPs almost always are, seem to live in a state of perpetual anger.   Since their exclusively individual experience is the only experience they know, they are unable to imagine that others’ self-experience is different.  Consequently, they are certain that whether others admit it or not, everyone else is also deeply, perpetually frustrated and consumed with resentment.  This assumption…this projection on others that they are all also perpetually frustrated and consumed with resentment…makes anyone who challenges them in any way “a lying, weaselly jerk who thinks he’s smarter than me, conspiring with other lying, weaselly jerks who think they are smarter than me, to try to keep me from having what I want.”

These thoughts have brought me to two conclusions that prevent me from sharing Professor Nichols’s hope that human beings can decide not the destroy themselves.

First, I think the AFP tendency to project resentment and anger on others pre-disposes AFPs and non-AFPs to have significantly different relationships with groups.  AFPs naturally clustering under banners that promise to “give me what I want.”   While non-AFPs come together in complicated assortments of overlapping and often-contradictory collaborative associations that focus upon “ensuring that we all have what we need,” and they all have different ideas about how that can be achieved.

The trajectory of the AFP association trend is uncomplicated and unifying, while the non-AFP associative pre-disposition toward cooperative, though not entirely like-minded, networks ever inclines them to greater and greater segmentation that often hinders unified action.

The second reason I don’t think that we will be able to think our way out of this mess is that AFPs’ exclusively individual consciousness causes them to think fundamentally differently from the way non-AFPs think.  In other words, I believe the human race has reached a point in which it is divided into two psychological camps that no longer process information the same way, and that difference cuts across all intellectual functions – particularly reason and the use of language.

For example, it is increasingly common for AFPs to characterize non-AFPs as morons.  From the AFP point of view, someone would have to be dumb as a bag of nails to try to set in place more and more structures…as non-AFPs perpetually do…that “add to my frustrations” by giving things to others.

And non-AFPs increasingly characterize AFPs as insane since non-AFPs see the hell AFPs are willfully making of the world.

Discussion between the two groups is pointless.  For an AFP, reason is not a tool of understanding, but a habit of thought focused solely on self-gratification and the elimination of frustrations.  Language is for ordering pizza or closing a deal…and more importantly…it is a tool for the every-waking-hour essential exercise of affirming themselves and diminishing everyone else.

It’s my instinct that everything we do is an act of self-expression, whether frying an egg or splicing genes, so everything we do is a self-portrait.  And to look closely at what we’ve done is to look in a mirror.  I think that the state of the planet is a grotesque mega example of collective human self-expression increasingly reflective of AFP-style thinking.  The world we live in…the environment that makes life possible…is being destroyed by increasingly dominant AFP “give me what I want” consciousness.

Returning to Professor Nichols observation, “… if the citizens of modern democracies were the kind of people willing to engage in the kind of honest reflection that leads to a commitment to political maturity, we wouldn’t be in the mess we’re in now.”  I think the head count of “the kind of people” Professor Nichols hopes for has dwindled so profoundly that for me hope is gone.  I think the tendency of our evolving consciousness toward ever-greater self-awareness has produced all the magnificent achievements of human creativity…from democracy to penicillin to kindness.  But also the growing self-centeredness that must inevitably conclude in the ruin of all.

Get to know the remarkable Tom Nichols.