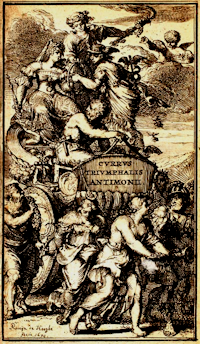 Before social media, isolation was the heavy tax levied on the luxury of minority views. The daring might attempt to reach out to others of like mind, but it was often risky and the cost was sometimes dear.

Nonetheless, as now, advances in information technology offered options. Starting about 560 years ago enterprising and determined Europeans employed movable type and published under assumed names to hide in plain sight, where only those looking for their own reflection might find each other.

In 1685 a book called Currus Triumphalis Antimonii (The Triumphal Chariot of Antimony), ostensibly the work of a 15th-century Benedictine monk, was published in Amsterdam. A colorful excerpt from the book’s “Dedicatory Epistle” follows here.

ercury appeared to me in a dream, and brought me back from my devious courses to the one way. “Behold me clad not in the garb of the vulgar, but in the philosopher’s mantle!” so he said, and straightway began to leap along the road in headlong bounds. Then, when he was tired, he sat down, and, turning to me, who had followed him in the spirit, bade me mark that he no longer possessed that youthful vigour with which he would at the first have overcome every obstacle, if he had not been allowed a free course.

Encouraged by his friendly salutation, I addressed him in the following terms: “Mercury, eloquent Scion of Atlas, and father of all Alchemists, since thou hast guided me hitherto, shew me, I pray thee, the way to those Blessed Isles, which thou hast promised to reveal to all thine elect children.”

“Dost thou remember,” he replied, “that when I quitted thy laboratory, I left behind me a garment so thoroughly saturated with my own blood, that neither the wind could efface it, nor all-devouring time destroy its indelible essence? Fetch it hither to me, that I may not catch a chill from the state of perspiration in which I now am; but let me clothe myself warmly in it, and be closely united thereto, so that I may safely reach my bride, who is sick with love. She has meekly borne many wrongs, being driven through water and fire, and compelled to ascend and descend times without number yet has she been carried through it all by the hope of entering with me the bridal chamber, wherein we expect to beget a son adorned from his birth with the royal crown which he may not share with others. Yet may he bring his friends to the palace, where sits enthroned the King of Kings, who communicates his dignity readily and liberally to all that approach him.

“I brought him the garment, and it fitted him so closely, that it looked like an iron skin securing him against all the assaults of Vulcan. “Let us proceed,” he then said, and straight away sped across the open field, while I boldly strove to keep up with my guide.

Thus we reached his bride, whose virtue and constancy were equal to his own. There I beheld their marvelous conjugal union and nuptial consummation, whence was born the son crowned with the royal diadem. When I was about to salute him as the King of Kings and Lord of Lords, my Genius stood by me, and warned me not to be deceived, since this was only the King’s forerunner, but not the King himself whom I sought. When I heard the admonition, I did not know whether to be sad or joyful.

What do you make of that?