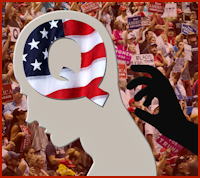 I know a wonderful woman, M, who manages a machine shop.  One of her employees, D, who M has known long enough to think of as a friend, frequently expressed extreme annoyance at M’s insistence that all employees must wear masks while at work.  D contracted Covid 19 and got very sick.  She survived, but for many weeks after the primary symptoms subsided, she was super weak and unable to concentrate.   M asked D why she had not gotten vaccinated and had not worn a mask while out and about in the world.  D said she had done her research and was convinced that the Covid “scare” was a hoax, so there was no way that she was gonna catch it.

When I heard this, what especially amazed me was D’s report that she “had done her research.”  What “research” could possibly satisfy someone that Covid is a hoax?  It turns out the authority D had consulted was Facebook.  M is a super smart person, and I’m sure anyone that works in her shop…and especially anyone she regards as a friend…could not be a complete idiot.   But Facebook as the authority for how to respond to a pandemic that had already at that time killed more than a million Americans!!!!!  I had to wonder, is D out of her f—ing mind?  So I also “did my research” and some thoughts that occurred to me follow here.

I doubt that D is technically insane, and I have no idea if she is a QAnon person, but I think she may have what I’m coming to think of as QBrain – an affliction that appears to have taken hold of a scary big chunk of the American population.  Here’s my understanding of the symptoms:

Conversation with a QBrainer can be frustrating.  For example, try pointing out to them that it’s pretty certain prominent Democrats are not running a child sex trafficking ring out of the basement of a particular pizzeria because an armed QBrainer has stormed that location and found that it has no basement.  Such observations just annoy them.  They don’t care about the truth or absurdity of any particular QBrained assertion.  One or two or hundreds of leads that don’t pan out don’t negate the integrity of the ennobling QBrain process.  AND, they see what you are doing.  They sense that you are implying that the path they are on, which has given their meaningless life meaning, is nonsense.  And that absolutely cannot be.  That must not be.  I can’t go back to being a nobody who doesn’t matter.

You may find of interest The Prophecies of Q – an element of the “research” I performed that significantly contributed to the formation of the thoughts I’ve shared above.